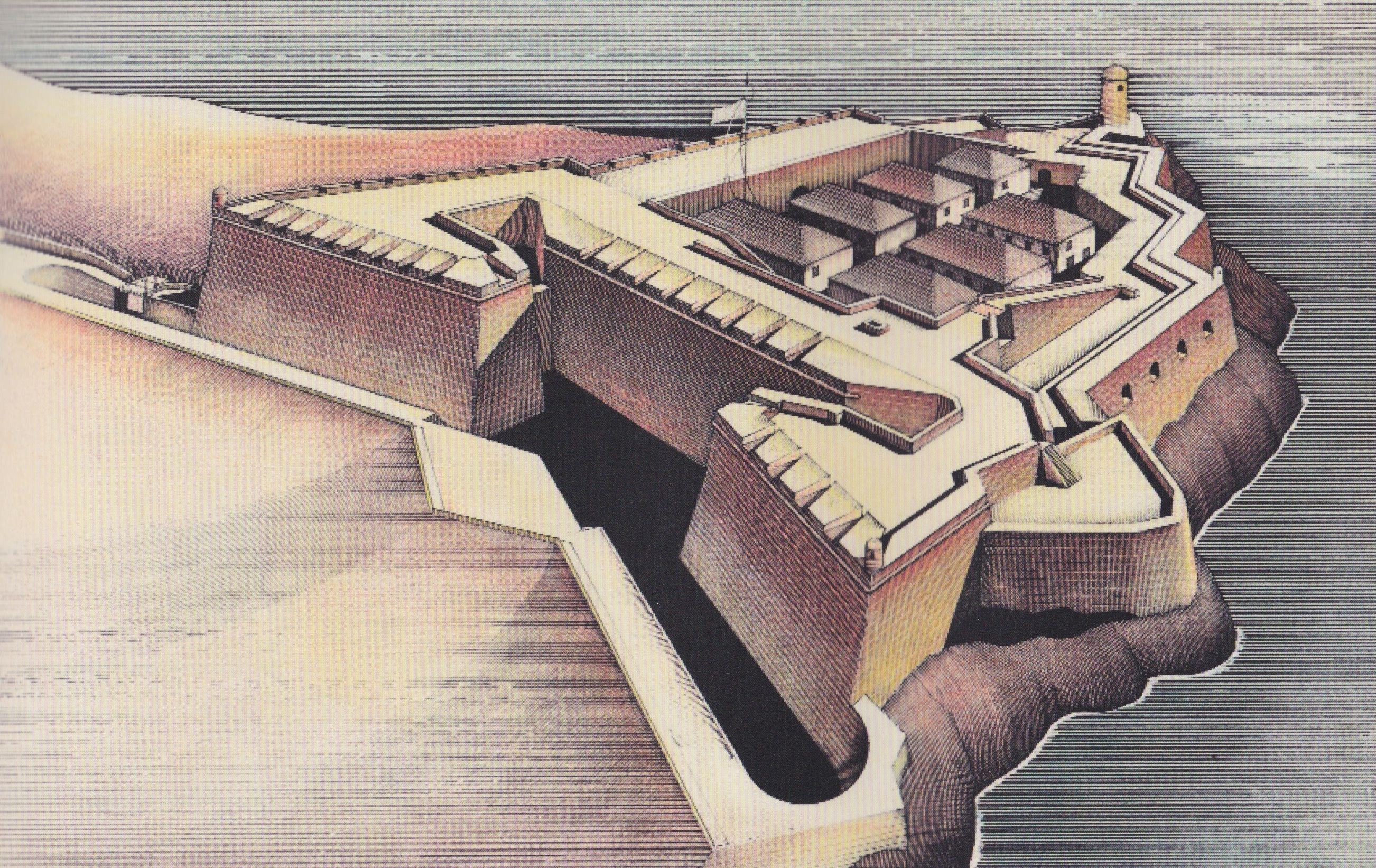 In 1589, the maestre de campo (field marshal) Juan de Tejeda arrived to Cuba with orders to begin construction of the Castillo de los Tres Reyes del Morro (or, El Morro) as well as La Punta (Weiss 1979a, 38). Construction ended in 1630. The fortress, in the shape of an irregular polygon, sits on the top of a cliff overlooking the bay of Havana. From the point of its projection over the sea, where a watchtower sits, successive curtain walls communicate with two bastions in the rear. El Morro, together with La Punta and La Real Fuerza, appear on Havana’s coat of arms along with a key, symbolizing the city’s identity as the “llave del Nuevo Mundo” (“key to the New World”) due to its importance as a principal port for Spanish fleets.

As mentioned previously, Aponte includes the Morro along with other locations around the bay of Havana as the setting of various allegorical and historical vignettes on láminas 8-9. In the trial, he describes an allegorical representation in which the guard of commerce tries to impede contraband trade but only meets death. He includes a portrait of Manuel Godoy, Spain’s prime minister, upon his elevation to the title of Admiral of Spain and Protector of the Indies and Commerce (Ferrer 2014, 322). To the right, he says there is a black man positioned next to the boat that brought news of Godoy’s elevation. Aponte places the boat in the bay of Havana, surrounded by the “Castles of the Punta the Morro with the Cabaña the Marina dock and Casablanca” (Pavez Ojeda 2006a, 724). Aponte also describes, after the entrance to the bay, a raft from which greed jumps onto a dock to battle with death. To the right of this, Aponte points out the Customs House, the Military Headquarters, the Government Palace, the Post Office, the Consulate, Santo Domingo church, and the ceiba tree near the Fuerza fortress. All of these locations stood on or around the Plaza de Armas, the city’s oldest plaza and the closest plaza to the entrance to the bay.

On lámina 23, Aponte depicts the Morro as part of what appears to be a map of Havana. He begins describing the map with locations near the entrance to the city, like the Campo de Zamora, and then follows the perimeter of the city’s walls around to the other side of the bay. Toward the top of the page, he says, one can see the Morro Castle and Cabaña Castle with their roads, stockades, and entrances. At the end of Aponte’s description of this page, his interrogator José María Nerey asks why he had made the map in which he had so precisely delineated the entrances and exits of the city along with its fortresses. Aponte replies that he “had only in mind the idea of entertaining himself with the drawing with no other intention[…]” (Pavez Ojeda 2006a, 729). Aponte’s opaque — and somewhat defiant — answer here may attempt to obfuscate the use of the map for the organizing of slave rebellions. Or, Aponte may simply be stating the truth: that he found enjoyment in bringing his artistic vision to fruition through his “book.”