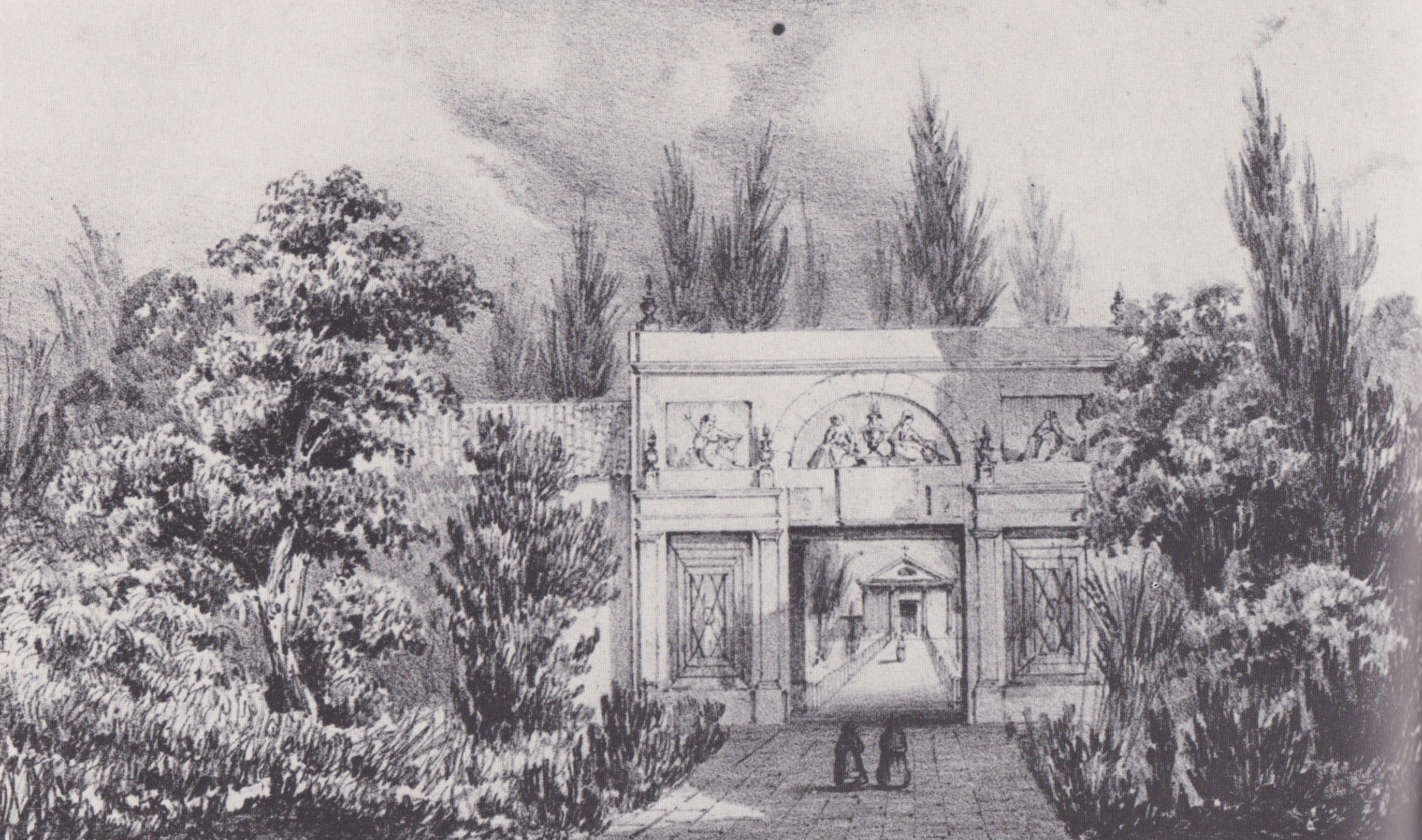 The Spanish bishop Juan José Diaz de Espada y Landa arrived to Havana in 1802 and commenced a series of reform projects that included the visual arts, but also public hygiene, education, and religious observation. In 1806, he inaugurated the city’s first general cemetery, thereby curbing the practice of burying the dead near parish churches. Espada worked with the French architect Étienne Sulpice Hallet to design the cemetery in a neoclassical style, complete with gateway arch. He commissioned the Italian artist Giuseppi Perovani to design panels for the arch, the first neoclassical structure in Cuba, along with the cemetery’s chapel. Espada also collaborated with Perovani on paintings for his aesthetic reform of Havana’s previously discussed cathedral.

Aponte knew of Espada’s presence in Havana and represented the general cemetery on lámina 20, lámina 21, and lámina 22 of his “book of paintings.” He likely saw the monumental arch along with Perovani’s allegorical designs there, which included Time and Eternity in the center lunette, and on either side, Religion and Medicine. Per the art historian Paul Niell, the figure of Time “a reminder of mortality, held a snake, possibly a caduceus, and wept, according to Roman Chacón, because of the corruptability of man. The figure of Eternity extinguished a torch, indicating the cessation of life” (Niell 2015, 79). Aponte also used allegorical imagery like this widely in his “book of paintings,” including scenes that may suggest influence from Perovani’s works. On láminas 8-9, Aponte represents a caduceus that signified commerce right before a scene in which a guard of commerce attempts stop contraband trade only to meet death. During the testimony, officials ask how the caduceus signified commerce if it was clear that on the page there was a figure of death who stood on the dock and held the caduceus, Aponte replied that “only death destroys greed” (Pavez Ojeda 2006a, 725). In Perovani’s center lunette, between the figures of Time and Eternity, “a vase of perfume signified that ‘time destroys all and turns it into smoke'” (Niell 2015). As such, Perovani and Aponte, in their images, both underscore the inevitability — and power — of death to triumph over man. In Aponte’s case, death’s destruction of greed perhaps stood as a necessary precursor to the total elimination of the slave trade then actively underway in Havana.