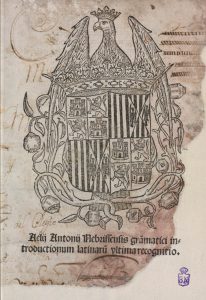 Identified in the trial record as: Arte Nebrija

Commentary by Pavez Ojeda: “This volume could be Nebrissensis gramatici introductionis latinae explicitae (Salamanca, 1481), which was published in many versions (at least 15 versions during the life of the author), under different names, and known as the Art of Nebrija, and which also included many volumes of commentary. There are editions of this circulating in América from 1586, and known American editions from 1664 (México). Irving Leonard shows in his study about the books of the conquerors the important demand for this book from the booksellers on the continent in the 16th and 17h centuries.[1] The problem in regard to this edition relates to Aponte’s declarations that he didn’t know how to read Latin. The other possibility is that the book is actually Gramática castellana de Antonio Nebrija (Salamanca, 1492), considered to be the first Spanish grammar book. The problem here is that we know of no printed version of the book until the 18th century, when a falsified version clumsily circulated (according to Palau y Dulcet).” (Pavez Ojeda 2006a, 753)