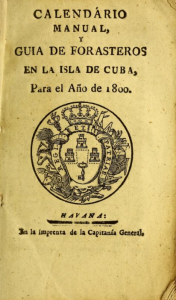 Commentary by Pavez Ojeda: “Guía de Forasteros de la Isla de Cuba. The first edition from 1781 includes as an appendix “Idea geográfica, histórica y política de la Isla de Cuba” by the Friar Fray José María Peñalver. There are also editions from 1793, 1794, 1796, 1804, 1807, 1808, 1810, 1811. There is no way to know which of these Aponte possessed, but they all followed a similar model. These Guides contained updated information about: Governors, Captains General, Vice-Royal Patrons, that had been in Havana, and the years they had served there; the Bishops of the Island in Cuba, and the years they had served there; chronological notes (included as an attachment to this dossier); the state of the Convents following the Order of their foundation; the Succession of the royal household of Spain; Summary of the sick; Doctors; Weddings, births, deaths, by race in 1791; the military State of Spain; the officers of the army and of the Battalions of Blacks and Mulattos; the Titles of Castille, Lawyers, public and royal Notaries, Solicitors, Surveyors; Ships constructed since 1724 in the Royal Shipyard of Havana: 112; the official statistics of the Embarkations that entered and left from the port of Havana (War, Commerce, Mail, Blacks) (in the year 1792, for example, 8987 blacks (2412 women), y 30568 books).” (Pavez Ojeda 2006a, 754)

Google Books provides access to the 1795 edition, among other versions.