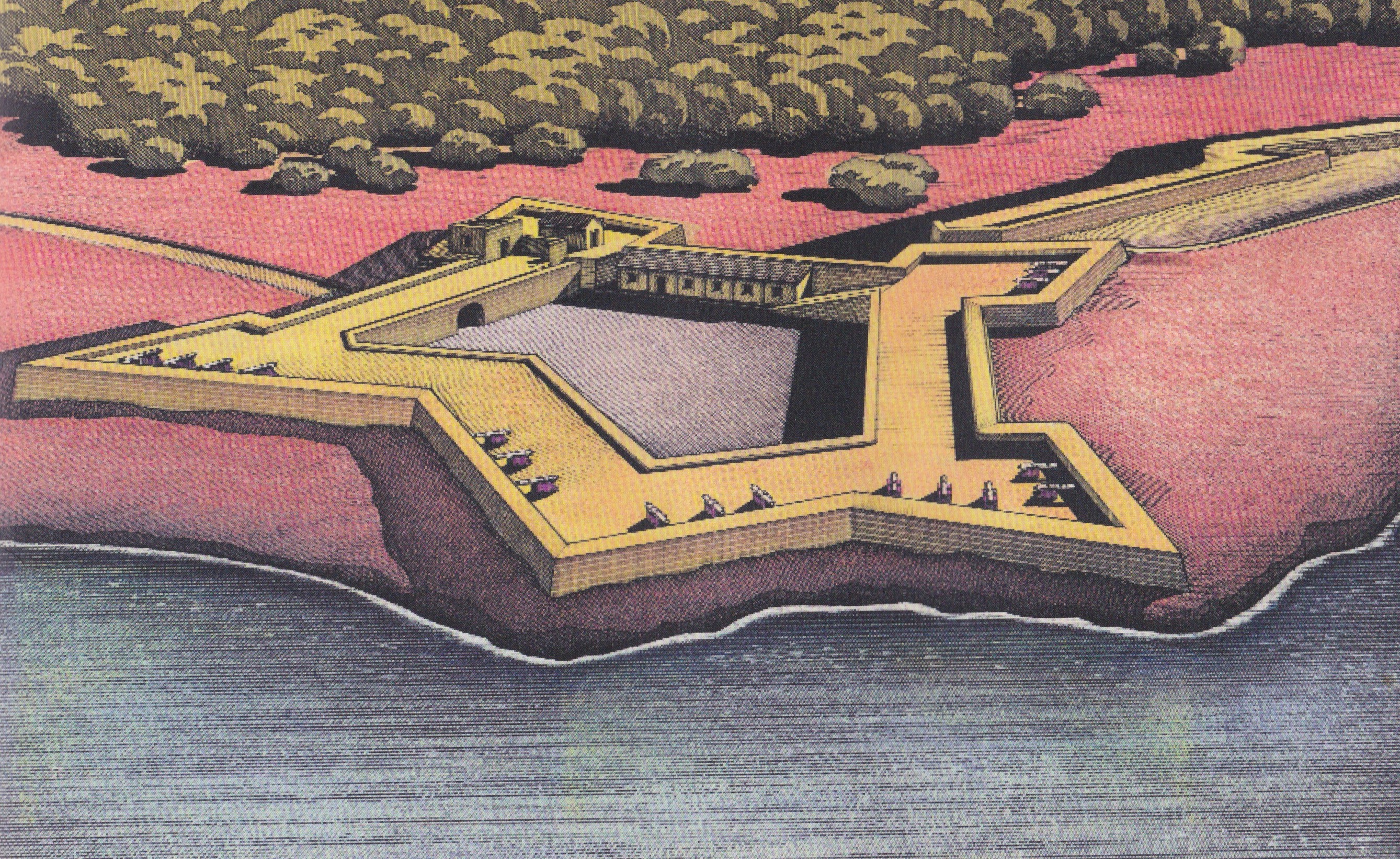 In the mid-sixteenth century, Havana solidified its position as a regular stopping point for Spanish fleets — and consequently became a regular target for pirate attacks. Beginning in 1556, the Spanish Crown realized that the area of the punta (the point), situated at one side to the entrance to the bay of Havana, needed to be safeguarded against attack (de la Fuente 2011, 74). They began building in 1589, and after various reconstructions, La Punta assumed a quadrilateral shape with four bastions, also in a Renaissance style like the nearby Real Fuerza. As discussed, La Punta, El Morro, and La Real Fuerza made up Havana’s first defensive system.

Aponte represents La Punta on three different occasions in his “book of paintings.” In the first, on láminas 8-9, he includes it along with other locations around the bay of Havana as the setting of various allegorical and historical vignettes. During his trial testimony, describes a visual allegory in which the guard of commerce tries to impede contraband trade but only meets death. He includes a portrait of Manuel Godoy, Spain’s prime minister, upon his elevation to the title of Admiral of Spain and Protector of the Indies and Commerce (Ferrer 2014, 322). To the right of that scene, he says there is a black man next to the boat that brought news of Godoy’s elevation. Aponte places the boat in the bay of Havana, surrounded by the “Castles of the Punta the Morro with the Cabaña the Marina dock and Casablanca” (Pavez Ojeda 2006a, 724). Aponte also describes, after the entrance to the bay, a raft from which greed jumps onto a dock to battle with death. To the right of this, Aponte points out the Customs House, the Military Headquarters, the Government Palace, the Post Office, the Consulate, Santo Domingo church, and the ceiba tree near the Fuerza fortress. All of these locations stood on or around the Plaza de Armas, the city’s oldest plaza and the closest plaza to the entrance to the bay.

On lámina 22, Aponte includes the Punta alongside other locations in Havana, from the Palacio de Capitanes Generales to the General Cemetery to the military barracks. Aponte offered little interpretation of this page, but his colleague, and free man of color, Clemente Chacón testified that Aponte did have a map of the city with the “entrances and exits of the fortresses in order to use this information after the revolution has been established in order to distribute people to the most appropriate locations” (Pavez Ojeda 2006a, 720). Although we do not know exactly why Aponte included these locations on this page, we can speculate they were, perhaps, integral to his vision for uprising.

On láminas 32-33, Aponte illustrates the black militias defending the city of Havana from British attack in 1762. In the upper right, he depicts his grandfather, Captain Joaquín Aponte, on horseback near the defensive system of Havana, including the Punta, the Torreón de San Lázaro, the Morro, and the Castillo de Santa Clara. In this page, and others, Aponte clearly ties his own family’s military history to the history of Havana. In this sense, their own actions became as important as the defensive fortresses of the city.