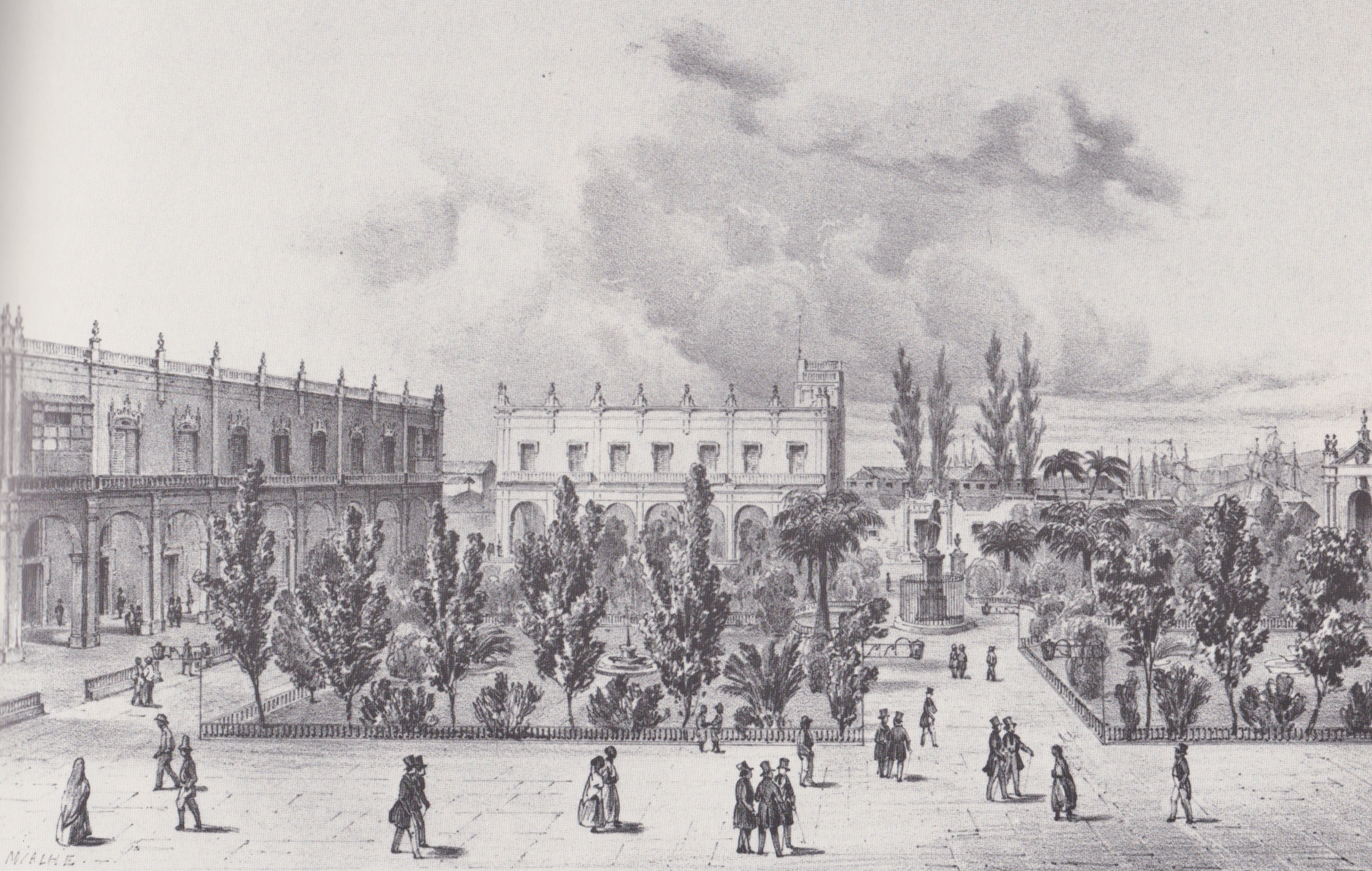 We see here a view of the Plaza de Armas with the Casa de Gobierno to the left and the Casa de Correo immediately adjacent. The French artist Frédéric Mialhe created this print after Aponte’s death, but we include it here for the view of the plaza and the two buildings. On láminas 8-9, Aponte includes the Plaza de Armas along with other locations around the bay of Havana as the setting of various allegorical and historical vignettes. He describes an allegorical representation in which the guard of commerce tries to impede contraband trade but only meets death. He includes a portrait of Manuel Godoy, Spain’s prime minister, upon his elevation to the title of Admiral of Spain and Protector of the Indies and Commerce (Ferrer 2014, 322). To the right, he says there is a black man next to the boat that brought news of Godoy’s elevation. Aponte places the boat in the bay of Havana, surrounded by the “Castles of the Punta the Morro with the Cabaña the Marina dock and Casablanca” (Pavez Ojeda 2006a, 724). Aponte also describes, after the entrance to the bay, a raft from which greed jumps onto a dock to battle with death. To the right of this, Aponte points out the Customs House, the Military Headquarters, the Government Palace, the Post Office, the Consulate, Santo Domingo church, and the ceiba tree near the Fuerza fortress. All of these locations stood on or around the Plaza de Armas, the city’s oldest plaza and the closest plaza to the entrance to the bay.

Following the British invasion of 1762, the Bourbon Spanish Crown recognized the urgency of defending the city given its geographic location and commercial role. Felipe Fondesviela y Ondeano (Marqués de la Torre), Captain General of Cuba from 1771-1777, carried out a series of Bourbon reforms, which generally sought to improve economic efficiency of Spain’s overseas possessions. A number of the reforms shaped the urban character of Havana.  The Marqués oversaw reforms like paving of streets, the completion of grand avenues, and the construction of public, and imperial, buildings.

The Marqués de la Torre envisioned the Plaza de Armas as the “first public space at the entrance to this city” and conceived of its reform, including the construction of new buildings, as integral to Havana’s growing importance (Sánchez Agusti 1984, 59). The reform included correcting the irregular shape of the Plaza de Armas and introducing architectural uniformity via the building façades of the newly constructed Casa de Gobierno and Casa de Correos. On the other sides of the plaza, officials projected the construction of barracks to house an infantry battalion, a customs house, and finally private residences for affluent citizens. The Spanish Crown approved the plan in 1774 so that the Plaza and its buildings would always be “decorous to the domination of the King, useful to the Population, and of utmost importance to the Government and its Policía” (Sánchez Agusti 1984, 60). Policía here refers to the Spanish concept that encompassed public citizenship in an organized polity and personal comportment, “both inseparable from urban life” (Kagan 2000, 27).